What is homesteading exactly?

Well according to Wikipedia it is:

“a lifestyle of self-sufficiency. It is characterized by subsistence agriculture, home preservation of foodstuffs, and it may or may not also involve the small scale production of textiles, clothing, and craftwork for household use or sale.”

Now that’s not a bad general summary, but to different people homesteading can mean different things.

To the uninitiated, there is often the thought that you need to have a small farm to become a homesteader, and while that would be nice, it certainly isn’t necessary.

The key thing about homesteading is about becoming less reliant on others, especially big businesses, and to become more reliant on yourself.

You can do this by growing and canning more of your own food, perhaps by raising some chickens. You can also look to repair and recycle products rather than having to continually discard and replace. Becoming more energy efficient and literally trying to live off the (electrical) grid has also become a part of homesteading.

This isn’t just about being Green and helping to save Mother Earth (though that’s a bonus!), it’s about being able to do things for yourself, so if things do go wrong, you will have your own food, your own power. You will have the knowledge and experience to live sustainably.

How to Bake Bread and Cultivate Yeast

Bread-baking can seem like a daunting task. When you look at recipes in a cookbook…

How to Make a Functional Shower

When things go bad and the world is in crisis, there are still some things…

How to Preserve Food by Smoking and Curing

As long as humans have been building campfires and seasoning food, they have been harnessing… 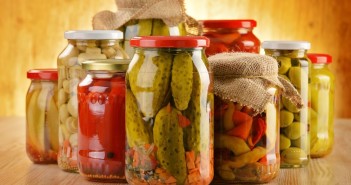 How to Preserve Food by Pickling

Pickling can be a great and flavorful way to preserve foods, whether for survival purposes…

Off the Grid Living: How to Get Started

Living off-grid means different things to different people. No particular meaning is wrong. For some…

How to Preserve Food by Canning

How to Preserve Food by Dehydrating

While there are all kinds of lightweight, long-lasting MREs available commercially—some of which have had…

How to Chop and Store Wood

How to Raise Goats on a Homestead

Goats are a fantastic homestead animal. They have great personalities, are reasonably easy to care…

How to Raise Chickens for Eggs and Meat

When you are trying to live self sufficiently, it’s often a good idea to only…