Starting in 1999 two famed weapon makers decided to combine their forces and market a new pistol. The companies were Walther and Smith and Wesson, and the pistol was the SW99.

This Smith and Walther collaboration was essentially a Walther P99 with some minor cosmetic differences. What was the reason for this collaboration? Well I can only speculate, but Walther have never been massively popular in the United States, and Smith and Wesson was a well-known brand.

The SW99 allowed Smith and Wesson to produce a modern polymer pistol, and allowed Walther to have some exposure, and have a few of their pistols on the US market.

The SW99 was the brainchild of this union, and it was truly an excellent pistol. The compact variant was similar to the hard to find P99C. The model I have acquired is the 9mm variant, and outside of size, it is identical to its bigger brother. The SW99s aren’t rare, but they are unusual, and not exactly common. They were produced for only 7 years and people tend to hold onto them.

The SW99 series is quite affordable, with the examples on the used market going for anywhere from $350 to $450 depending on accessories and wear and tear of course.

My SW99 compact came with 4, 10 round Smith and Wesson magazines, and 1, 15 round Walther P99 magazine, a Gould and Goodrich holster, all for $400 dollars. I consider it a hell of a good deal!

The SW99 compact is quite unique in the world of striker fired handguns. First off it is a true double action / single action design. Of course the double action is a longer trigger pull, but is quite light, and smooth. The single action is remarkably crisp, and very short. The trigger on the SW99 is a work of art and Springfield and Glock should take notice, or should have taken notice. They certainly took notice of the interchangeable back straps on the full size SW99, as this was the first gun to do something like this.

The SW99 also has a unique trigger ‘setting’. This is known as the anti-stress trigger.

Think of it as a long single action. This allows for something similar to locked and cocked carry, but in a safe manner. 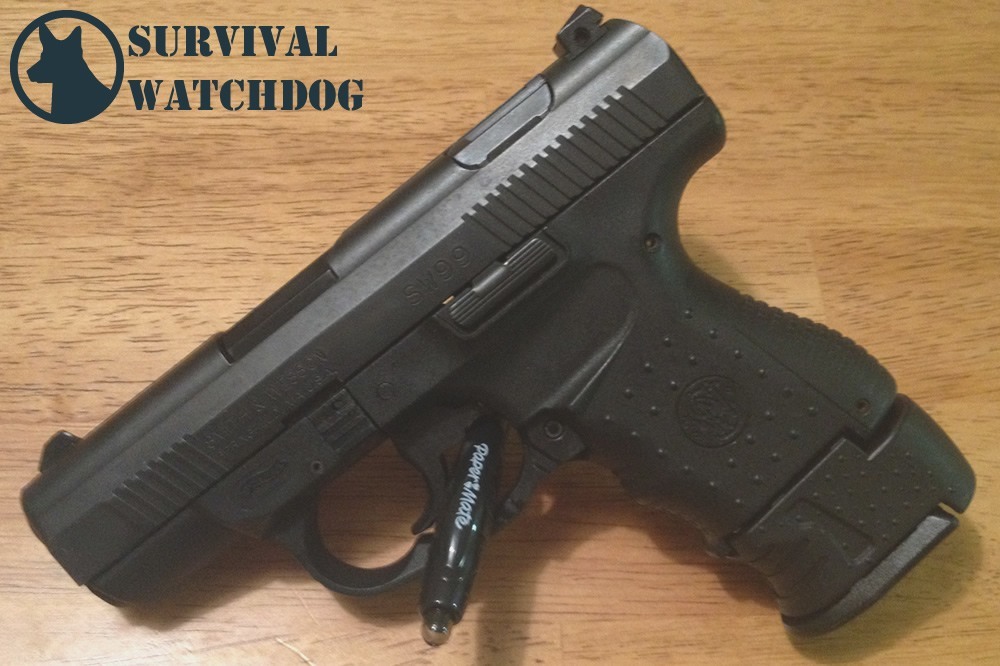 Speaking of safeties, there isn’t one. Not a traditional manual safety anyway; but with the double action pull, and the drop safety, a manual safety isn’t needed.

The SW99 compact is designed for concealed carry, and I personally don’t keep safeties on my carry guns. The SW99 features a cocked indicator, which is basically like a hammer on a traditional double action / single action. When the cocking indicator is exposed out of the rear of the slide, the weapon is in single action mode.

Of course once you rack the slide and put a round in the chamber the weapon is single action, and carrying a weapon in single action mode means the striker is only a few pounds from going off. This isn’t the best way or safest way to carry the weapon, if drawn it would only take a bit of pressure for the gun to go off. The first trigger pull should always be deliberate. The SW99 compact features a de-cocking button on the top of the slide. Simply press it and you can feel the gun de-cock, and observe the cocking indicator going into the slide.

On the range the SW99 compact performs brilliantly. Accuracy is top notch with the weapon. No doubt the wonderful trigger is part of the reason. The trigger’s reset is probably the shortest I’ve ever felt. It’s audible and tactile, and insanely short. Double taps with this weapon are an absolute breeze to do both rapidly and accurately.

The weapon was capable of placing accurate headshots at 25 yards with ease. The weapon features a standard three dot sights that are not minimized on the carry version. They are very easy to acquire and put on target.

The grip is wonderful, very ergonomic, and very pointable. There is good reason since the grip was designed by Morini Competition arms, a Swiss manufacturer who builds Olympic level competition pistols.

With the SW99 compact the grip is shortened extensively, and with the flush fit magazines the pinky finger hangs off the end. With the pinky extension the gun is much more comfortable to fire, and more accurate. With the Walther P99 15 round magazine, and the Walther grip extension you get a full sized grip at the cost of a longer, less concealable handgun. The SW99 compact is quite lightweight, like any polymer pistol.

The tapered, thinning of the slide makes it a bit more compact and more comfortable for everyday carry. The ability to load ten or fifteen round magazines is a major advantage when it comes to versatility. With the ten round magazine, the weapon is surprisingly compact and very easy to carry.

Magazines are not difficult to find since it can accept standard Walther P99 magazines and the basic ten round P99c magazines. These mags are a little expensive though, right around $30 dollars apiece, and you probably won’t find them locally, so you have to order online.

Holsters are also uncommon when it comes to the SW99 and P99 compact models, so not all options are out there.

The SW99c is a wonderful weapon, perfect for home defense or concealed carry.

The SW99 is a very underrated firearm, and very affordable in most situations. If you have a chance to acquire one of these weapons I would recommend you buy it in a heartbeat.

Travis Pike is a veteran Infantry Marine and a lifelong firearms enthusiast. He lives deep in the woods of North Florida, where he can shoot at his leisure. He has been hunting since he was 8 and has always enjoyed the outdoors. Travis is an NRA certified instructor and loves teaching others anything and everything about firearms. He splits time between writing, running a training course, and of course a 9 to 5 job. He is a vocal gun rights activist. When he’s not writing, shooting, or working he is often found sipping craft beer on his porch